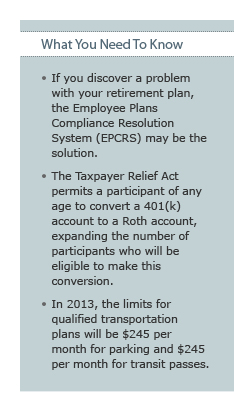 In Revenue Procedure 2013-12, the IRS recently updated the Employee Plans Compliance Resolution System (EPCRS).  The EPCRS program permits a retirement plan sponsor to correct operational, coverage and plan documentation errors in certain prescribed ways so as to preserve the tax-qualified status of the retirement plan.  If the plan errors are corrected in accordance with the EPCRS, the IRS will not impose financial sanctions on the plan or the plan sponsor.

The EPCRS has three types of correction programs:

Changes made to the EPCRS program include:

If you discover a problem with your retirement plan, the EPCRS may be the solution.  Please contact us to explore your options.

The American Taxpayer Relief Act of 2012 (the "Taxpayer Relief Act"), which was enacted to avoid the "fiscal cliff," provides plan participants with additional opportunities for converting 403(b), 401(k), and certain 457(b) plan accounts into a Roth account.  Under prior law, all or part of an individual's account in a retirement plan was eligible to be converted into a Roth account provided that:

The last restriction generally meant that only participants who had already attained age 59 ½ or terminated employment were eligible to convert their pre-tax accounts to a Roth account.  A participant who elects a Roth conversion is required to pay federal income tax on the amount converted for the year in which the conversion took place.  Any subsequent distribution of the converted amount, plus earnings, generally would not be subject to income tax.

The Taxpayer Relief Act permits a participant to convert his or her pre-tax account to a Roth account whether or not it is currently distributable, thus greatly expanding the number of participants who could be eligible to make this conversion.

The Taxpayer Relief Act also had an impact on fringe benefits.

Some Temporary Rules Made Permanent:

Although tax laws can always be changed (so describing anything as "permanent" may be a misnomer), inertia now works in favor of the following benefits which no longer have expiration dates.