For the second year in a row, the USPTO kept its inventory of pending ex parte appeals at remarkably low levels.  This sustained decrease now opens new options for companies and other patent stakeholders.

Over the last decade, the number of ex parte appeals pending before the Patent Trial and Appeal Board (PTAB) has remarkably decreased by about 82%.1 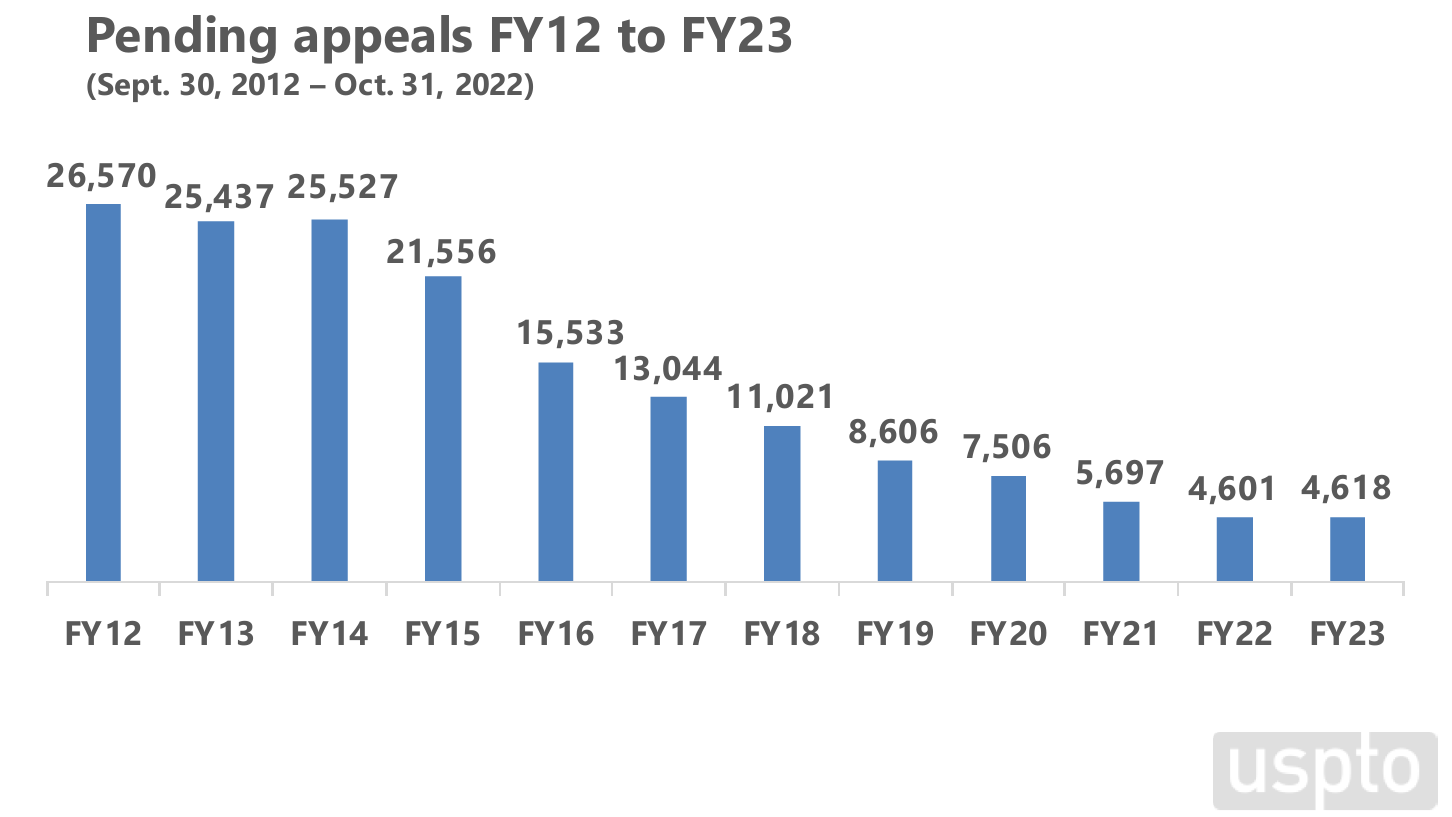 The amount of time a patent application spends pending before the PTAB on appeal has been decreasing for many technologies.  For appeals decided in the electrical arts over the last two fiscal years (FY21-FY22), there has been a sharp decrease in the number of months that an appeal spends pending. 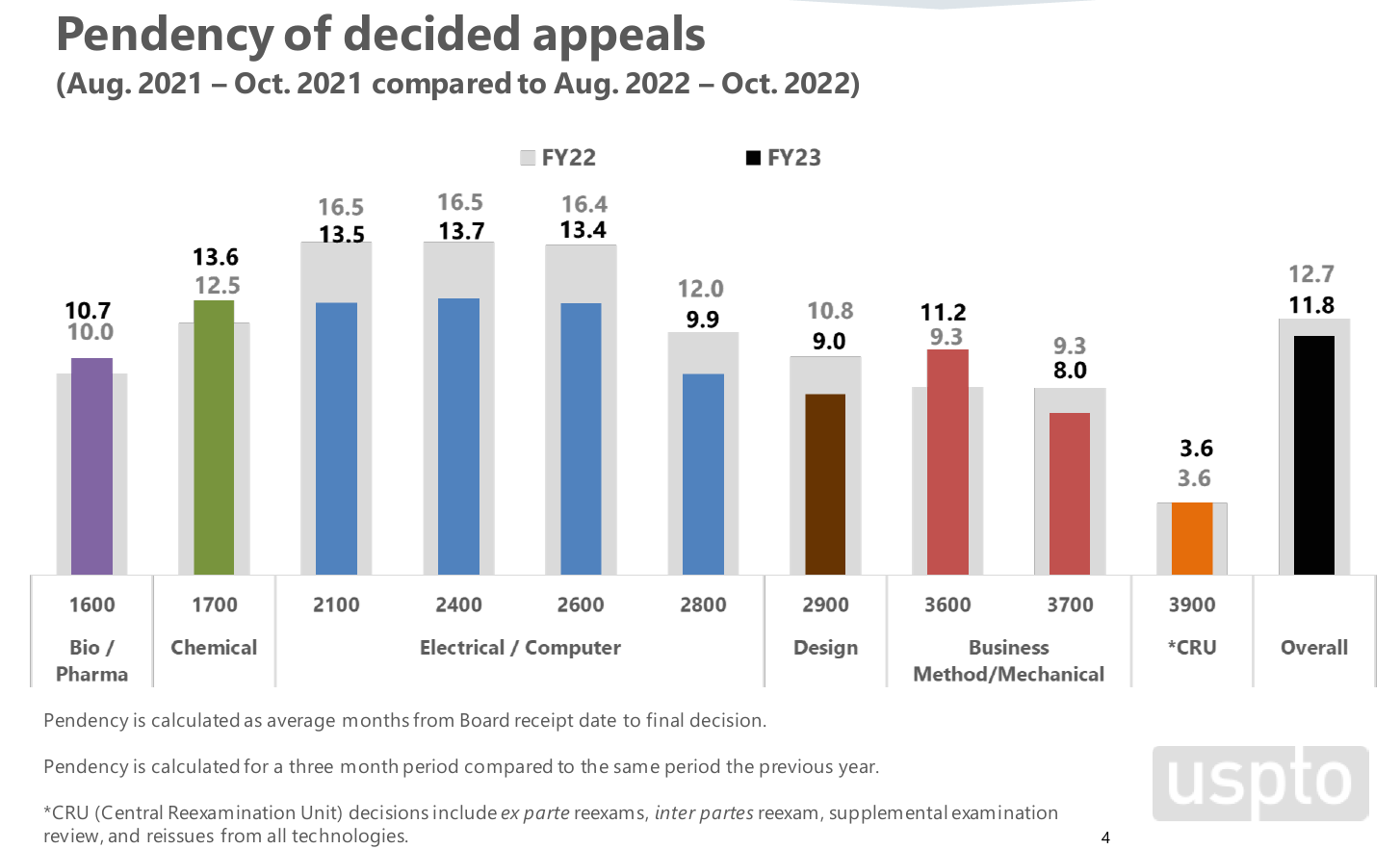 Looking more closely, we see there have been significant reductions in electrical and computer Tech Centers where appeals have generally had the longest pendency.  In percentage terms, all major electrical and computer-related Tech Centers 2100, 2400, 2600, and 2800 reduced appeal pendency about 17%-18% in the periods compared in 2021 and 2022.   Not surprisingly, Tech Center 3900, which handles reexaminations and other post-issuance procedures, has the shortest average pendency at less than 4 months.  In contrast to the electrical arts, appeal pendency has increased about 7-9% for bio/pharma and chemical Tech Centers 1600 and 1700.  Likewise Tech Center 3600, which infamously includes e-commerce and business methods art units, increased in pendency.  Overall, the total pendency for an appeal before the PTAB across all technologies dropped about 7% and is now just under one year.

Impacts on Patent Applicants and Defendants

This appeals environment raises new options for patent stakeholders.  In the past many companies were dissuaded from filing an appeal by the length of pendency.  Now applicants may find more situations where filing an ex parte appeal is advantageous.  Given the reduced average pendency, an appeal may be a more attractive option where an examiner has become entrenched in an unreasonable position.  For inventions covering key products, a determination by the PTAB on appeal may be a more effective route to resolve prosecution for broader claims rather than pursuing narrowing amendments in continued prosecution with multiple office actions.   Also, appeals concluded at the current pendency rates may be an expedient option to resolve subject matter eligibility questions under 35 U.S.C. § 101.

The Office has an obligation to handle ex parte reexamination proceedings with special dispatch.   This speed is borne out in the reported pendency statistics.  Although the case numbers are small and hard to extrapolate, the Central Reexamination Unit’s (Tech Center 3900) average pendency on appeal is a relatively short 3.6 months.   Defendants facing a patent assertion threat now should take into account the total time to complete an ex parte reexamination through appeal at the current pendency rates when comparing with inter partes review and other post-grant challenge options which can take about 18 months.

While statistics do not reflect what may happen to a particular case, stakeholders should keep an eye on the reduced backlog and pendency rates in certain technical areas as it may open the door to more use of appeal practice where warranted.

1 Results reported by the USPTO in FY2022 roundup on Oct. 31, 2022 at https://www.uspto.gov/sites/default/files/documents/appeal_and_interference_statistics_2022_october.pdf