2/15/2012 Labor and Employment Alert: Summaries of Benefits and Coverage (SBCs) Back on the Schedule and Other Employee Benefits News

11/21/2011 Labor and Employment Alert: Summaries of Benefits and Coverage on Hold and Other Employee Benefits News

Why the new fee? 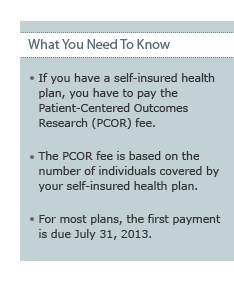 The IRS released proposed regulations (available at http://federalregister.gov/a/2012-09173) on April 12, 2012, explaining how the PCOR fee is to be calculated and paid.  Even though the regulations are only proposed, you are expected to follow them pending publication of final regulations.

Who pays the PCOR fee?

What plans are subject to the PCOR fee?

In general, the PCOR fee applies to any medical plan that is not an "excepted benefit." The table below lists types of plans that are subject to the PCOR fee and others that are exempt.

FSAs:  Most FSAs are excepted benefits and are not subject to the PCOR fee.  An FSA is generally an excepted benefit if: (a) employees who are eligible for the health FSA are also eligible for medical benefits; and (b) either (i) the FSA is funded solely by employees' salary reduction contributions, or (ii) the employer's contribution to the FSA does not exceed the greater of (A) $500; or (B) twice the employee's salary reduction contribution.

When does the PCOR fee apply?

The PCOR fee will be reported on IRS Form 720 and paid annually.  The form and payment will be due July 31 for all plan years ending in the preceding calendar year.

If a group health plan covers the employees of two or more entities in a controlled group and a plan document designates a specific entity in the group as the plan sponsor, the plan sponsor files the Form 720 for all entities with employees participating in the plan.

If a group health plan covers the employees of two or more entities in a controlled group but a plan document does not designate a plan sponsor, each entity with employees participating in the plan must file a separate Form 720 based on its employees and their family members.  If the entities want to file a single Form 720, they have until the first due date to designate a plan sponsor for purposes of the filing.

How much is the PCOR fee?

Divide the total by four (or the number of sample days).

Special rule for first year:  For a plan year that starts between October 2, 2011 and July 11, 2012 (90 days after the proposed regulations became publically available on April 12, 2012), you can use any reasonable method of determining the average number of covered individuals.

Special rule for FSAs and HRAs:  If you have an FSA or HRA that is subject to the PCOR fee, enrollment in an FSA or HRA is always treated as single coverage.  You do not need to take into account the fact that the FSA or HRA can be used to reimburse medical expenses incurred by family members.

You have to pick one method for all coverage (other than FSAs and HRAs) reported for a plan year but you are free to change methods for future plan years.

Supreme Court decision expected near the end of June

More guidance on Summaries of Benefits and Coverage (SBCs)

DOL FAQs (available at http://www.dol.gov/ebsa/faqs/faq-aca8.html) clarify some open issues with respect to SBCs.

To reduce the number of SBCs provided to employees:

The DOL also clarified the timing of SBCs related to annual open enrollment:

If you have employees in one of the counties where 10% or more of the population is literate in only the same non-English language, your SBCs will need to include a notice of the availability of language services and foreign language SBCs must be available upon request.

The IRS recently posted new procedures for auditing COBRA compliance.  Pursuant to these procedures, an IRS examiner will request the following documentation:

The IRS examiner may also ask for records of qualifying events in the year(s) under examination, records as to how notices and elections were handled, employment tax returns, and/or lists of all enrolled individuals (including spouses and dependent children).  You may want to review the IRS procedures (available at Audit Techniques for COBRA Cases) and use them to self-check your preparedness for an IRS audit of COBRA compliance.

IRS CIRCULAR 230 DISCLOSURE:  In order to ensure compliance with requirements imposed by the U.S. Internal Revenue Service, we inform you that any federal tax advice contained in this communication (including any attachments) is not intended or written to be used, and it cannot be used, by any taxpayer for the purpose of (i) avoiding penalties that may be imposed under the U.S. Internal Revenue Code or (ii) promoting, marketing, or recommending to another person, any transaction or other matter addressed herein.