Labor and Employment Alert: Summaries of Benefits and Coverage (SBCs) Back on the Schedule and Other Employee Benefits News

1/30/2012 Labor and Employment Alert: Update on Reporting the Cost of Health Coverage on Form W-2

A short history of SBCs 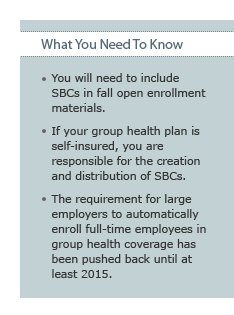 individuals make apples-to-apples comparisons of their options for health coverage.  The Internal Revenue Service, Department of Labor and the Department of Health and Human Services (the Departments) published proposed SBC rules and an SBC template on August 22, 2011.  Those rules would have required employers to provide SBCs to employees enrolling in health coverage on and after March 23, 2012.  But then the Departments announced, on November 17, 2011, that they would push back the SBC effective date while they considered the problems pointed out by the public.

When does your SBC need to be ready?

The new effective date for the SBC rules is based on the first open enrollment period and plan year starting on or after September 23, 2012 (six months later than the original March 23, 2012 effective date).  The SBC rules apply to:

If your enrollment year and plan year are the calendar year, the SBC rules will apply to your next open enrollment window (generally conducted in the fourth quarter of 2012) and to all enrollments on or after January 1, 2013.

SBCs are required for both grandfathered and non-grandfathered health plans.  There is no exception for small employers.

When do SBCs have to be distributed?

After the effective date:

Who is responsible for creating and distributing SBCs?

Responsibility for creating and distributing SBCs depends on whether your group health plan is insured or self-insured.

The Department once again provided a template, text for insertion and instructions.  Generally, the creation of an SBC is a fill-in-the-blanks exercise where you transfer your group health plan design onto the template.  You must follow the prescribed layout, font size (12 point), and (with one exception) wording.  What’s new is that if the wording does not accurately describe one or more plan terms, you must use your best efforts to come up with something else that would accurately describe the terms.

The new template is an improvement over the original version.  The insurance terminology has been changed so that the template is more appropriate for a self-insured plan. We no longer need to include the premium (cost) so that fewer SBC amendments may be needed.

An SBC may be provided either as a stand-alone document or in combination with other summary materials (like a summary plan description) if the SBC information is intact and prominently displayed at the beginning of the materials, such as immediately after the table of contents in an SPD.

If you offer more than one option for health coverage, you will need a separate SBC for each option.  Only the SBC for employees’ current options have to be provided during open enrollment but, as a practical matter, we anticipate employers may choose to provide SBCs for all available options.

You do not need SBCs for so-called “excepted benefits” (such as dental or vision coverage when it is either separately insured or, if self-insured, separately elected and subject to a separate employee contribution).

Expect changes to the template for 2014.

Large employers (in this context, employers with 200 or more full-time employees) will have to automatically enroll full-time employees in group health coverage.  Because of the numerous issues that will have to be worked out to make this requirement operational, the Department of Labor previously told us to expect the requirement to go into effect in 2014 but not before.  Now, the Department of Labor has pushed automatic enrollment back at least another year.  Automatic enrollment will not be required before 2015.

Full-time status and waiting periods in 2014

Starting in 2014, large employers (in this context, employers with 50 or more full-time employees) will be penalized for failing to offer group health coverage to all full-time employees.  A full-time employee is one who works, on average, 30 hours per week.  The determination of full-time status will be made on a retrospective basis, by counting hours during a look-back period of no more than 12 months.

Another requirement going into effect in 2014 is a 90-day maximum on waiting periods to enroll in group health coverage.

New FAQs in DOL Technical Release 2012-01 describe the Departments’ current thinking on the interplay between the determination of full-time status and the 90-day cap on waiting periods.  Most importantly, an employer will not be subject to penalties for failure to offer group health coverage to an employee during his or her first three months of employment.  In addition, if an employer limits eligibility for its group health plan to full-time employees, the 90-day waiting period will start when an employee enters the eligible class (i.e., full-time employees).  This would mean:

Please let us know if you want more details about the Departments’ emerging vision of group health coverage in 2014.