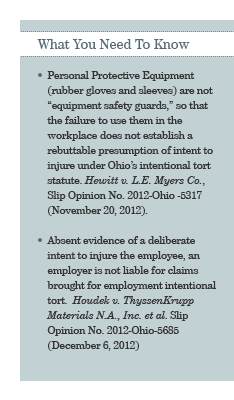 The employer, an electrical utility construction contractor, assigned its apprentice lineman (employee) to work at a site replacing old electrical power lines along Route 60 in New London, Ohio. The employer held a daily job-briefing in which it instructed workers that they were required to use protective rubber gloves and sleeves, (protective equipment) in case power lines became energized. The employee signed the daily job-briefing log, but claimed he had arrived late to the job site on the day of his injury and missed the briefing. He also asserted that he was instructed by a non-apprentice lineman that he should not need the protective equipment because the lines would be de-energized. This conversation was disputed by the co-worker. Ultimately, the employee did not wear the rubber gloves or sleeves, and received severe burns when a wire that he was holding came into contact with an energized line.

The employee applied for and received Ohio workers' compensation benefits. In addition, he filed an application against his employer for payment of penalties in the form of additional compensation for violation of a specific safety standard (VSSR). The VSSR claim was settled by the parties. A third avenue of recovery was pursued with the filing of a complaint for workplace intentional tort. In his complaint, the employee alleged that the employer knew with substantial certainty that he would be injured when working in an elevated lift bucket near energized high – voltage power lines without the use of protective equipment.  He further contended that the gloves and sleeves were "safety guards" which were effectively "deliberately removed" by the employer, since the employee was not wearing them. The case went to trial before a county common pleas court jury which rendered a verdict in favor of the employee. The court of appeals affirmed the jury’s award and the employer appealed to the Ohio Supreme Court.

Under Ohio's intentional tort statute, employees may recover for workplace injuries under two theories of liability. Sections (A) and (B) of the statute provide a cause of action where sufficient evidence is presented of the employer's deliberate or direct intent to injure the employee. Alternatively, section (C) provides that deliberate removal by an employer of an equipment safety guard creates a rebuttable presumption that the removal was committed with intent to injure. The Trial Court determined that insufficient evidence of direct intent to injure was presented by the employee, and the case proceeded solely on the issue of whether the evidence supported the employee’s theory that his failure to wear protective equipment operated as a "deliberate removal" of an "equipment safety guard" by his employer. The jury found for the employee and the court of appeals upheld that result.

Writing the majority opinion, Justice Lundberg Stratton expressed disagreement with the employee's position that an "equipment safety guard" should be broadly defined to include any safety-related item which can serve as a barrier between an individual and a workplace danger. Instead, the Court focused on the legislative intent of the statute---to restrict employer liability for intentional torts.

With this opinion, the Court declined to expand the scope of the statutory rebuttable presumption afforded to employees, remaining true to the General Assembly’s unambiguous statute, which limits employer liability to circumstances where a protective device is intentionally removed from a workplace machine.

The employee was assigned a light duty position in accordance with medical restrictions he had as a result of a previous work-related injury. The position required him to re-label goods while standing in a warehouse aisle where sideloaders were being driven to pick products. While he was performing this job, a coworker, who forgot about the employee working in the aisle, drove a sideloader down the aisle and into the employee, pinning the employee against a scissor lift, breaking his leg and shattering his ankle. An action for employer intentional tort was commenced against the employer, who moved for summary judgment. The trial court granted the employer's motion, but the Eighth Appellate District Court of Appeals reversed. In its opinion, the appellate court discarded the statutory definition of "substantial certainty" as a "scrivener's error" and applied an objective standard, "what a reasonably prudent employer would believe" would cause injury to the employee. The Supreme Court reversed the appellate decision, upholding the subjective statutory definition of "substantial certainty," consistent with the General Assembly's intent to limit employer liability for such claims.

The employee made two assertions; 1) that he should not have to prove what his employer actually believed (the "substantial certainty" test); instead, that he was entitled to judgment based upon proof of what a "reasonably prudent" employer would believe, and; 2) that the employer's failure to install better lighting, and to require the use of equipment like safety cones or reflective vests constituted "deliberate removal of a safety guard" which entitled him to the presumption that his employer intended to injure him.

Reminiscent of the Supreme Court's opinion in the Hewitt case two weeks prior, the decision focused on the legislative intent behind the employer intentional tort statute- to curtail actions against employers. On this basis, the Court declined the employee's invitation to discard the subjective, employer-friendly "substantially certainty" standard, and held that employees must demonstrate an employer's deliberate intent to injure in order to recover on a claim for workplace intentional tort.

The placement of employees into potentially dangerous situations does not rise to the level of deliberate intent to injure and does not establish liability for employment intentional tort. In such circumstances, workers' compensation is the employee's exclusive remedy.

This client alert is for general information purposes and should not be regarded as legal advice. As always, please let us know if you want more information or have questions about how these developments apply to your situation.