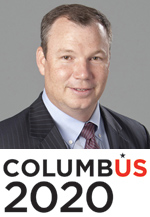 We asked Kenny McDonald, president and chief economic officer of Columbus 2020, to answer some questions regarding the organization, its upcoming initiatives and the evolving perception of Columbus.  Kenny has helped lead the execution of the Columbus 2020 Regional Growth Strategy and development of the Columbus region’s competitiveness agenda, and he has also built local and national partnerships that have accelerated the area’s development.

What recent deals demonstrate that Columbus has arrived as an economic-development location?

We believe two trends demonstrate our growth.  First, the growth over this decade continues to compound and create more opportunity for small businesses and a bigger tax base for our communities.  Hundreds of companies have chosen to invest in the Columbus region the past several years that would have previously dismissed central Ohio.  Second, I do think that our ability to secure large, high-impact projects matter.  Amazon’s cloud facilities in three different communities in the region set in motion a number of opportunities with IT providers and other major tech companies, including other large projects like Facebook.  Likewise, Sofidel, a large Italian tissue manufacturer is building its first greenfield project in the United States in Circleville, just 30 minutes from Columbus.  This project has already created hundreds of construction jobs, grabbed the attention of other European manufacturers, and reinforces the region’s strong logistics location for time sensitive product.  This is a huge project for any community, but it has an even bigger impact on Circleville, a small community that has clawed its way back from the jobs losses suffered in the 1990s and 2000s.

Have you noticed a change in the outside perception of Columbus following the Smart City Challenge victory?

The successful Smart Cities challenge bid did several things for the community.  First, it caused a community conversation about advanced mobility and “access” to our region’s education, health care and employment opportunities for our most disadvantaged areas.  This effort has been the catalyst for expanded thinking about what is possible in the near future and how our region will address mobility for decades to come.  Second, it did raise the awareness of Columbus as a large city (2nd largest city in the Midwest) and as a collaborate region.  The private sector investment has been lauded by other civic leaders around the country, and the coordination between the Ohio DOT, The Ohio State University, as well as surrounding areas like Union County, the City of Dublin and the City of Marysville creates a unique value proposition.  Dozens of companies are investing or considering pilot projects in the region because of the initiative.

Obviously, large deals are the ones that make the news, but can you share Columbus 2020's efforts involving small businesses?

We don’t distinguish between small and large businesses.  Our focus is on economic base businesses as a regional organization.  Economic base businesses bring new dollars into our region and create growth in retail, housing, healthcare and professional services.  Manufacturers, headquarters, logistics and service operations that serve customers around the world are the focus of our strategy.  These new dollars expand our economy and build a sustainable tax base.

What are some of the biggest challenges that Columbus faces as it works to attract outside investment?

We are surrounded by great metropolitan areas in Ohio and the Midwest, all of which are seeing a resurgence of economic activity.  We have to work hard to continue to compete and differentiate the Columbus region.  Our focus is to grow our talent base by retaining and attracting great people from around the world, and building infrastructure that moves people, goods and data better than any of our competing cities.

How soon can we expect a rebranding to Columbus 2030?

We are working on it already!  While this decade is not over and not all of our goals have been fulfilled, we are rapidly approaching the time to address what comes next.  It is important that we integrate the platform the region has created into an even stronger plan for the coming years.  It only gets more competitive the larger we get.

We are proud of our region and the State of Ohio.  JobsOhio has created a statewide economic development platform that is second to none and accelerates and integrates our work with others across Ohio.  So much of what has been done locally can be attributed to having a powerful, well-resourced state partner in JobsOhio.  Secondly, all projects are local projects.  We are very fortunate to have local partners that are constantly working to improve the physical, financial and workforce product of this region.  They are collaborative and they are competitive, and we believe they are only getting more so each year.