Labor and Employment Alert: Update on Reporting the Cost of Health Coverage on Form W-2

11/21/2011 Labor and Employment Alert: Summaries of Benefits and Coverage on Hold and Other Employee Benefits News 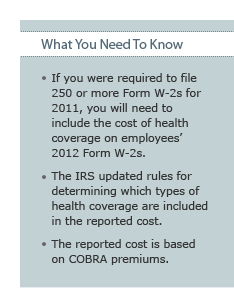 Who has to report?

Whose coverage has to be reported?

If an individual isn't already entitled to a Form W-2 from your company, you don't have to generate one just to report the cost of health coverage.  This means, for example, you do not have to report the cost of coverage for partners, individuals who retired or terminated employment in a prior year (who do not receive reportable compensation in the current year), or a former spouse on COBRA.

What coverage has to be reported?

The cost of coverage reported on Form W-2 generally includes medical and prescription drug coverage.  As to other types of health coverage:

What is the reportable cost?

If the employee requests his or her Form W-2 before the end of the year, you are not required to report the cost of health coverage on the employee's Form W-2.

The IRS recognizes the system changes needed to implement Form W-2 changes.  Future guidance will apply no sooner than the first calendar year starting at least six months after the guidance is issued.

As always, please contact us if you want more details or if you want to discuss how these Form W-2 requirements apply to your company.

In other news ... Still no clarity on essential health benefits

In our January 3, 2012 Client Alert, we described a Bulletin published by the Department of Health and Human Services (HHS) on how it intends to allow states to designate benchmark plans.  The designated benchmark plans would set the standard for the essential health benefits that must be included in health insurance sold on state exchanges, at least for 2014 and 2015.  HHS has now published an "Illustrative List" of the plans states might choose as their benchmarks plans (available at http://cciio.cms.gov/).  However, neither the Bulletin or the List addresses the specific services that must be classified as essential for purposes of the prohibition on dollar limits on essential health benefits.